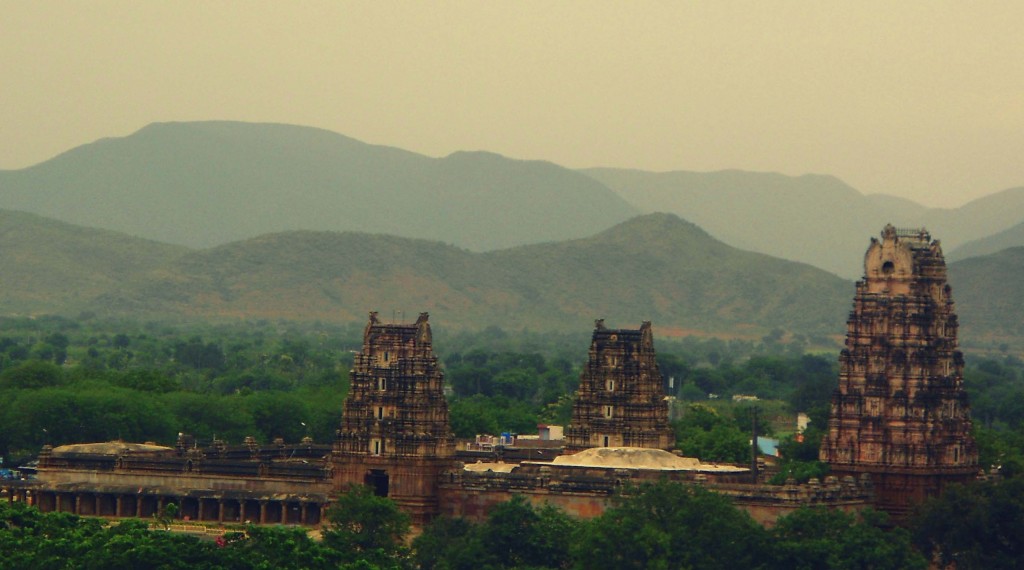 Sri Kodandarama Swamy temple is a Hindu temple dedicated to the god Rama, located in Vontimitta town in Korajampet taluk of Kadapa District in the Indian state of Andhra Pradesh. The temple, an example of Vijayanagara architectural style, is dated to the 16th century. It is stated to be the largest temple in the region. It is located at a distance of 25 kilometres (16 mi) from Kadapa and is close to Rajampet.

The temple was built during the reign of Chola and Vijayanagara kings around the 16th century.

Bammera Potana who lived in Vontimitta wrote his magnum opus Maha Bhagavatham in Telugu language and dedicated it to Rama. Vavilakolanu Subba Rao, known as ‘Andhra Valmiki’ for translating Valmiki’s Ramayana (the Hindu epic that narrates Rama's tale) into Telugu also spent his time here worshipping Rama. The saint-poet Annamacharya is said to have visited the temple and composed and sang songs or kirtans in praise of Rama. Jean-Baptiste Tavernier, a French traveler who had visited this temple in 1652, appreciated the elegance of the temple's architecture. There is Rama Baktha named Bhavanasi Mala Obanna sang songs or kirtans in praise of Rama in front of temple and there is symbol of Mandapam (Utla Stambam) Bhavanasi Mala Obanna in front of east Gopuram.

The temple, the largest in the region[2] is built in Vijayanagara style of architecture, in the "Sandhara" order[4] within a rectangular yard enclosed by walls. The temple, located 16 kilometres (9.9 mi) from Siddhout via Bakarapeta, is architecturally elegant and impressive. It has three ornate Gopurams (towers) of which the central tower, which faces east, is the entrance gateway to the temple; the other two towers face north and south. This central tower is built in five tiers, and a number of steps are provided to access the approach gate of the tower.

The mandapa or the Rangamantapam, the open-air theatre, has exquisite sculptures. As the mandapa is supported over 32 pillars it is known as Madhyarangaradapam. The colonnades in the mandapa have carved figurines of attendant apsaras (nymphs). The columns of the central support system on the southern side display carvings of the gods Krishna and Vishnu. Each of the corner columns have three layers carved with images of apsaras and deities. In the central part of the mandapa, there are piers which are adorned with images of the mythical creatures yali. The roof of the central part is built up with many decorative brackets or corbels. In one of the columns of the mandapa, images of Rama and his brother Lakshmana are sculpted. Rama is shown here in a standing position with bow in the right hand and arrow in the left hand. Other decorative art depiction in Rama's image consists of Kundalas (ear-rings), haras (garlands), valayas, yagnopavita (sacred thread) and so forth. Lakshmana's figure is sculpted in tribhanga posture with his right hand held down free while the left hand holds a bow. Adornments carved on this image are kirtimukuta (conical crown), graivevakas, channavira, udarbandha (waist band), yagnopavita and purnaruka. Krishna is in dvibhanga posture with the left leg firmly on the ground and the right leg bent at the knee and crossed over the left leg, a style termed as Vyatyastapada. Of his two arms, the right hand is shown holding the Govardhana hill while the other is rested on kati. The image is ornamented with kirtimukuta and many more other ornaments. Two cows are also depicted by his side.

The sanctum sanctorium or garbhagriha is approached from the mandapa through an antaraalayam or inner chamber, which is adorned with sculptures. In the garbhagriha, the central icon of Rama along with his consort Sita and Lakshmana are carved as a composite image, out of a single rock. It is also inferred that the garbhagriha is itself carved out of a single block. The monkey-god Hanuman, Rama's devotee, who is generally shown with the trio is missing here. However, there is a separate temple for Hanuman here. There is also an image of Ganesha in a dancing posture in the mandapam.

The state government has decided to take over the upkeep of this temple, which is presently with the Archaeological Survey of India (ASI). This temple is notified as an Ancient Monument (N-AP-50) by ASI. The two sacred water tanks – Rama theertham and Lakshmana theertham – are located in the precincts of the temple.